The Outreach 100 Fastest-Growing and Largest churches study is a collaboration between Outreach magazine and our friends at Lifeway Research and Hartford Institute for Religion Research. Many churches are continuing to make adaptations to the way they minister to their communities in response to the COVID-19 pandemic. Most are also in the process of building back to a new sense of normal as church life has begun to stabilize. We wanted to get a sense of how churches are doing that. So, in addition to profiles of some of these churches and their leadership, the Outreach editorial team conducted interviews with many of the pastors and reports on those conversations here and at Outreach100.com.

What is your methodology?

Each year, the Lifeway Research team surveys churches, verifies the numbers, calculates the results and compiles the lists. In preparation for this annual report, they solicited participation from more than 13,000 churches. Through the process, they were contacted multiple times by email and fax. This is a self-reported survey, based on attendance averages, not membership. Churches that participated answered questions about their 2022 in-person weekend attendance averages for February and March (excluding Easter) as compared to their 2021 numbers. The final Fastest-Growing rankings reflect an average of numerical gain and percentage gain.

To provide as complete of a list as possible for the Largest churches, we also drew numbers from the Hartford Institute for Religion Research, which is not a survey, but is secondary research drawn from publicly available attendance data. This included the church's own website, year-end reports, public interviews and attendance reporting in sermons online. We integrated that public data with the self-reported survey from Lifeway. Whenever the survey and the public data reported on the same church, we reported the church's response in the survey. Although we go to great lengths to confirm data, the information is reported by pastors, staff or church officers, or was publicly available at the time the information was collected. The timing of these attendance estimates varies. As such, the reporting reflects their perception and the attendance figures they have published on the internet or disclosed in services. And, of course, this is a survey (for those who responded) and or a publicly available number (for those on the Hartford site, HIRR.Hartsem.edu ). This is not an investigation of those numbers, but is a survey and list.

We seek the broadest possible participation from evangelical Protestant churches, but since The Outreach 100 is not an independent investigation, there are omissions. Some churches chose not to respond to multiple interview and data requests for a variety of reasons. Others did not make their attendance data publicly available online. If you notice the absence of a high-profile evangelical church, chances are they were invited to participate but opted out. As public attendance data is concerned, a number of large churches disclosed their membership, but not their attendance, or reported their attendance as a combination of both in-person and online. For those reasons, a church may not appear.

So, is this just a celebration of numbers?

Certainly The Outreach 100 is a celebration of numbers in a sense. It is a recognition that what began with the Holy Spirit adding to the infant church after Pentecost (Acts 2:47) is continuing today. Ultimately, though, The Outreach 100 is not so much about numbers as it is the individuals those numbers represent—people who have found hope in Christ and the churches pointing them to him. If you glean insight from those churches and catch something of their passion for outreach, this special issue will have fulfilled its purpose.

While only a small number of churches rise to the level of megachurch and few will find themselves listed among the country's fastest-growing churches, there is a growing number of congregations focused on and investing in kingdom growth through strategic church planting. That's why we created our list of 100+ reproducing churches. In partnership with Exponential, we invite any church of any size to take The Church Multiplication Challenge . And who knows? You might just see your church here in the future.

Read More on the American Megachurch 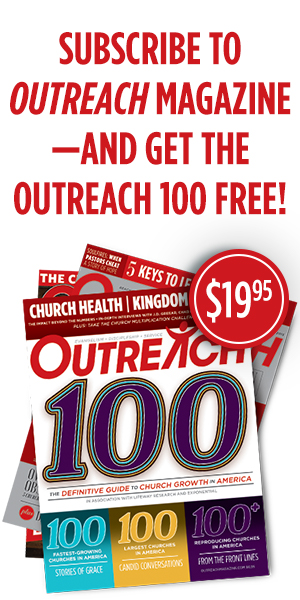